How to update stock market data automatically with CrateDB and Airflow

Watch this tutorial on Youtube: How to update stock market data automatically with CrateDB and Airflow - YouTube

If you are struggling with keeping your stock market data up to date, this tutorial walks you through exactly what you need to do so you can automate data collection and storage from SP500 companies. 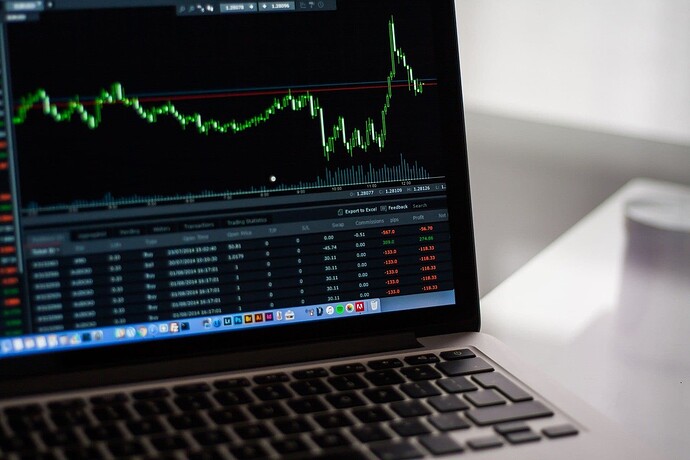 Let’s have a quick overview of what you’ll do:

You have a goal: regularly update stock market data.
To achieve your goal, you can divide it into tasks: download, prepare, and store data. You want to turn these tasks into a workflow, run it and observe the results; in other words, you want to orchestrate your workflow, and Airflow is the tool for that.

So the first thing to do is to start CrateDB and set up a table to store your data. Then, to orchestrate the process of regular data updates, you will create an Airflow project and establish the connection to CrateDB. Once you set up your Airflow project, you will write your tasks in Python as an Airflow DAG workflow (more details later). Finally, you will set a schedule for your workflow, and it’s done!

Let’s get right to the setup on a Mac machine.
You want to make sure you have Homebrew installed and Docker Desktop running.

Run CrateDB and create a table to store data

The first to do is to run CrateDB with Docker. It’s easy: once you have Docker Desktop running, copy the Docker command from the CrateDB installation page and run it in your terminal.

With CrateDB running, you can now access the CrateDB Admin UI by going to your browser and typing localhost:4200.

Let’s now create a table to store your financial data. I’m particularly interested in the “adjusted-close” value for the stocks, so I will create a table that stores the date, the stock ticker, and the adjusted-close value. I will set the closing_date and ticker as primary keys. The final statement looks like this:

We are done with the Admin UI for now. Let’s return to the terminal to install Astronomer.

Let’s return to the terminal, open a new tab, and install Astronomer with this command:

When Astronomer is ready, it’s time to create a new directory for your airflow project. You can do that by running

Then, initialize the directory with the command

Now you have the skeleton of your Airflow project, which looks like this:

Some information about the default settings: the PostgreSQL server is set up to listen on port 5432, and the web server is on port 8080. If these ports are unavailable, you can change them, and I’ll show you how to do it shortly.

There are now three things you have to adjust before running Airflow:

Now you are done with the last adjustments, head back to your terminal and run this command to start Airflow: astro dev start
You can now access Airflow in your browser at localhost:8081

In Airflow, you define tasks as nodes on a DAG - short for Direct Acyclic Graph. That means you set the tasks to run one after the other without cycles to avoid deadlocks.
A task (or node) does not stand by itself: it depends on other tasks, and other tasks depend on it. These dependencies are the edges of the Graph and make up the DAG structure by connecting the tasks. You bring the DAG to life by writing the tasks in Python with the help of Airflow operators and Python modules. Now you’ve learned enough to start building your DAG step-by-step!

Create a .py file for your DAG in your astro-project/dags folder; I will call it financial_dag.py. The DAG file has the following structure:

Let’s start by importing the necessary operator to connect to CrateDB, the PostgresOperator, and the decorator to define the DAG and its tasks. You will also import the datetime, pendulum modules to set up your schedule and the yfinance, pandas, and json modules to download and manipulate the financial data later.

Don’t forget to add these modules to the requirements.txt file inside your project like so:

The next step is to declare the necessary tasks to download, prepare and insert data.

Let’s first write a function to download data from yfinance; I will call it download_yfinance_data.
You can use ds for today’s date or get yesterday’s date with airflow.macros.ds_add(ds, -1). You start by listing tickers from stocks of interest into a tickers variable. You then pass this list and the start date as arguments to the yf.download function and store the result in a data variable. data is a pandas data frame with various values for each stock, such as high/low, volume, dividends, and so on. Today, I will focus on the adjusted close value, so I filter data using the Adj Close key. Moreover, I return the data as a JSON object (instead of a data frame) because it works better with XCom, which is Airflow’s mechanism to talk between tasks. Finally, you set this function as an Airflow task using the @task decorator and give it an execution timeout.

Next in our code comes a prepare_data task, making the insert task more manageable later. In this function, you get the data in JSON as a parameter and transform it into a data frame for easier manipulation. Then, you take the closing_date, ticker, and adj_close columns from the sp500 table you created and make them keys in a dictionary. You turn each data frame row into a dictionary with these keys. Finally, you add each of these dictionaries into a values_dict list, and done! Mark it as a task with the @task decorator, and give an execution timeout. Now the data is ready for the last task: insert it into CrateDB.

So you have a list of dictionaries, each having values to import into CrateDB. For each of these values, you want to execute the INSERT statement, and that’s when the expand method comes in handy. What Airflow does here is similar to defining the task in for loop: it creates n copies of the task, one for each input.

You use the SQLExecuteQueryOperator to execute SQL statements against CrateDB using the cratedb_connection you defined in the beginning. Your final task looks like this:

Finally, it’s time to wrap everything up in your main execution method, financial_data_import. Here, you start by storing the downloaded data from download_yfinance_data into a yfinance_data variable and then storing in prepared_data the results from prepare_data. Then, the SQLExecuteQueryOperator is called to perform the INSERT.

Set DAG and its tasks

Now that you have your main execution method, it’s time to put the DAG together. You start with the @dag decorator and define the schedule parameter; in my case, I’ll make it run daily. You can also give it a start_date for the first DAG run, for example, from 2022-12-01. If the start date is before the current date, by default, Airflow will attempt to backfill all missed DAG runs. If you don’t want that to happen, set the catchup parameter to false.

Your DAG structure will look like this: you first add the operators and modules, then the tasks. Then comes the DAG definition followed by the primary execution method: in this case, financial_data_import. The last line calls the main method, and your Airflow DAG is ready!

Now that your DAG code is ready, you can interact with it from the Airflow UI. Navigate to http://localhost:8081 and enter the default credentials (user = admin, password = admin) to access the Airflow UI. You should now see the DAG you just created under the DAGs tab.

Airflow UI2048×606 139 KB
Next to the DAG’s name, you find a toggle button to pause/unpause the DAG’s execution. And if you click on the DAG’s name, you get redirected to a page with different views for your DAG. For example, clicking on Graph will show you the tasks you have recreated; you can check out your code on the Code tab, and the Grid gives you information about your last runs and access to the logs.

A play button on the top right triggers the DAG manually. So let’s click on it to test our DAG.

On the Grid view, you can click on these squares to check out the execution details. 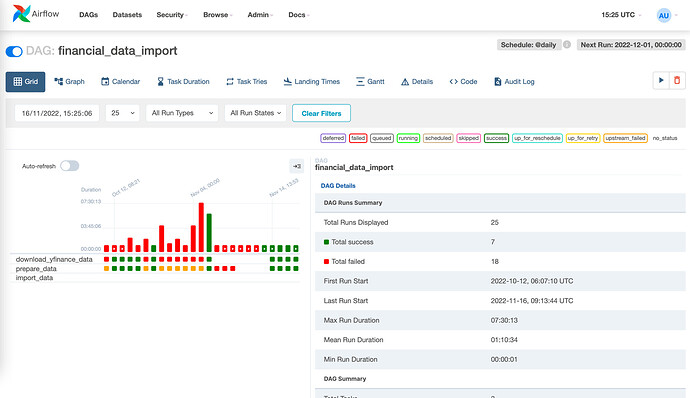 Check out the data in the Admin UI

Now that your task is executed let’s check the data in CrateDB!
In the Admin UI, select your table in the tables tab and click Query Table. You should now see some of the records you just imported! From now on, you can easily access your financial data in CrateDB and use it as you like. 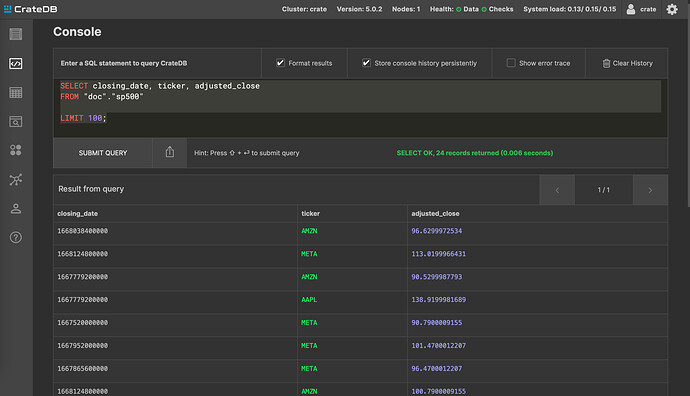