Monitoring an on-premises CrateDB cluster with Prometheus and Grafana

If you are running CrateDB in a production environment, you have probably wondered what would be the best way to monitor the servers to identify issues before they become problematic and to collect statistics that you can use for capacity planning.

Things are a bit different of course if you are using containers, or if you are using the fully-managed cloud-hosted CrateDB Cloud, but let’s see how all this works on an on-premises installation by setting all this up together.

First we need a CrateDB cluster

First things first, we will need a CrateDB cluster, you may have one already and that is great, but if you do not we can get one up quickly.

In my case, I am using Ubuntu and I did it like this, first I ssh to the first machine and run:

This is a configuration file that will be used by CrateDB, we only need one line to configure memory settings here (this is a required step otherwise we will fail bootstrap checks):

We also need to create another configuration file:

In my case I used the following values:

This tells CrateDB to respond to requests both from localhost and the local network.

This lists all the machines that make up our cluster, here I only have 2, but for production use, we recommend having at least 3 nodes so that a quorum can be established in case of network partition to avoid split-brain scenarios.

This lists the nodes that are eligible to act as master nodes during bootstrap.

This indicates that the crate super user will work for local connections but connections from other machines will require a username and password.

And this requires both nodes to be available for the cluster to operate in this case, but with more nodes, we could have set recover_after_data_nodes to a value smaller than the total number of nodes.

Repeat the above steps on the other node.

This is very simple, on each node run the following:

then uncomment the CRATE_JAVA_OPTS line and change its value to:

and restart the crate daemon:

This can be set up with a one-liner:

The SQL Exporter allows running arbitrary SQL statements against a CrateDB cluster to retrieve additional information. As the cluster contains information from each node, we do not need to install the SQL Exporter on every node. Instead, we install it centrally on the same machine that also hosts Prometheus.

Please note that it is not the same to set up a data source in Grafana pointing to CrateDB to display the output from queries in real-time as to use Prometheus to collect these values over time.

Installing the package is straight-forward:

For the SQL exporter to connect to the cluster, we need to create a new user sql_exporter. We grant the user reading access to the sys schema. Run the below commands on any CrateDB node:

We then create a configuration file in /etc/prometheus-sql-exporter.yml with a sample query that retrieves the number of shards per node:

To apply the new configuration, we restart the service:

The SQL Export can also be used to monitor any business metrics as well, but be careful with regularly running expensive queries. Below are two more advanced monitoring queries of CrateDB that may be useful:

You would run this on a machine that is not part of the CrateDB cluster and it can be installed with:

Please note that by default this will right away become available on port 9090 without authentication requirements, you can use policy-rcd-declarative to prevent the service from starting immediately after installation and you can define a YAML web config file with basic_auth_users and then refer to that file in /etc/default/prometheus.

For a large deployment where you also use Prometheus to monitor other systems, you may also want to use a CrateDB cluster as the storage for all Prometheus metrics, you can read more about this at CrateDB Prometheus Adapter.

Now we will configure Prometheus to scrape metrics from the node explorer from the CrateDB machines and also metrics from our Crate JMX HTTP Exporter:

We will replace that with two entries per node, pointing to port 8080 (Crate JMX Exporter) and port 9100 (Prometheus Node Exporter). Additionally, the Prometheus SQL Exporter runs locally on the Prometheus host on port 9237.

Restart the prometheus daemon if it was already started (systemctl restart prometheus).

If you now point your browser to http://<Grafana host>:3000 you will be welcomed by the Grafana login screen, the first time you can log in with admin as both the username and password, make sure to change this password right away.

Click on “Add your first data source”, then click on “Prometheus”, and enter the URL http://<Prometheus host>:9090.

If you had configured basic authentication for Prometheus this is where you would need to enter the credentials.

An example dashboard based on the discussed setup is available for easy importing on grafana.com. In your Grafana installation, on the left-hand side, hover over the “Dashboards” icon and select “Import”. Specify the ID 17174 and load the dashboard. On the next screen, finalize the setup by selecting your previously created Prometheus data sources. 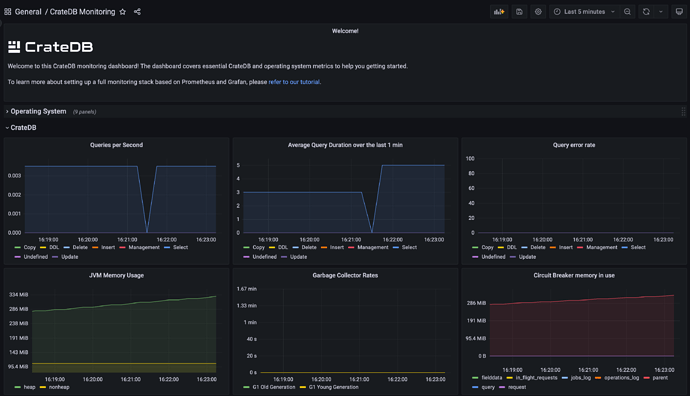 If you decide to build your own dashboard or use an entirely different monitoring approach, we recommend still covering similar metrics as discussed in this article. The list below is a good starting point for troubleshooting most operational issues:

We got a Grafana dashboard that allows us to check live and historical data around performance and capacity metrics in our CrateDB cluster, this illustrates one possible setup. You could use different tools depending on your environment and preferences. Still, we recommend you use the interface of the Crate JMX HTTP Exporter to collect CrateDB-specific metrics and that you always also monitor the health of the environment at the OS level as we have done here with the Prometheus Node Exporter.